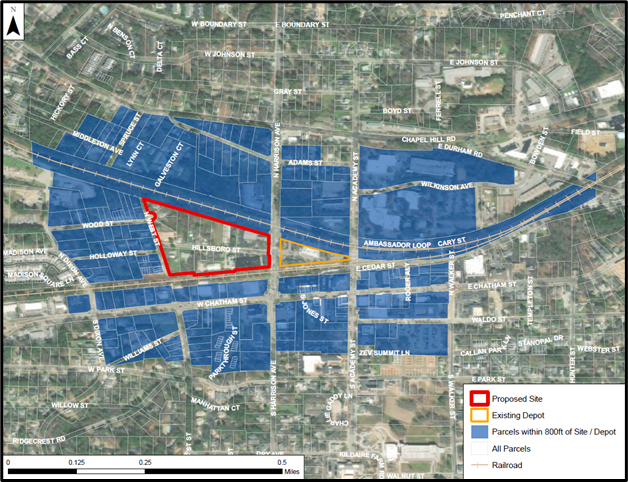 What is a Multi-Modal Center and why does Cary need one?

A Multi-Modal Center is a place where multiple modes of transportation come together.  It is a place where it is easy to make connections between modes of getting around, such as walking or riding a bicycle to catch a bus or taking a rideshare vehicle to catch a train.  It can also be a destination for reasons other than transit, such as meeting friends for dinner, shopping for a birthday gift, or attending a community meeting.

The Wake Transit Plan details a program of transit improvements which include expansion of local and regional bus service, new Bus Rapid Transit (BRT), and opportunities for future Commuter Rail service.  The current location for transit service, the Cary Depot, does not have the capacity to support these new transit services which will connect Cary citizens to the region. (Return to Top)

How was the location for the proposed Multi-Modal Center selected?

As the feasibility study evaluated potential locations for a new Multi-Modal Center, several considerations were critical.  Amtrak intercity rail service requires access to both rail lines running through downtown, and the facility requires a section of straight track that is at least 800 feet long to accommodate a longer passenger platform.  The site must also accommodate future Bus Rapid Transit and Commuter Rail services.  The location should also provide opportunities for mixed-use development, in line with Cary’s vision for a vibrant downtown.  (Return to Top)

Were other locations considered?

Cary worked with WSP to conduct a Downtown Cary Multi-Modal Center Feasibility Study.  Site selection was a major task of this study.  WSP provided a “Cary Multi-Modal Site Selection Analysis Report” which details the locations that were considered and the rationale for the final recommendation.  (Return to Top)

What will the proposed Multi-Modal Center be used for?  What is included in this project?

The Multi-Modal Center will serve many purposes, some of which are known at this point, and some of which are still to be determined.  The Multi-Modal Center will serve as a transportation hub for local and regional bus service, Bus Rapid Transit (BRT), intercity passenger rail, and future commuter rail.  It will also offer opportunities for bike- and ride-share connections.

The Cary Community Plan envisions a downtown that is supported by a multi-modal transportation center.  This center is a catalyst for supportive mixed-use development that could include retail, commercial, and residential space, community gathering areas, and places for public meetings.  As this project moves forward, there will be additional opportunities for the public to share what they would like to see included in this project.  (Return to Top)

What are some other benefits of the Multi-Modal Center?

In addition to better regional public transportation access and development opportunities, this project will improve the wait time at the train crossings on Harrison Avenue and Academy Street.  The length of track at the existing Depot is approximately 560 feet, with a platform of roughly 400 feet.  This means when a train pulls into the station it cannot clear the intersections, so the gates remain down while passengers board and disembark.  The train may also need to pull forward and stop a second time to access the baggage car.  A platform length requirement of 800 to 1,000 feet at the Multi-Modal Center means that trains will have more room to serve the new station without regularly blocking the intersections with stopped trains.  (Return to Top)

How will residents and business owners in the proposed project area be affected?

The Town will need to acquire property within the proposed project area in order to construct the Multi-Modal Center. We recognize that this will have impacts for people who live and work in the area.  There isn’t a single answer to this question as each situation is unique and the Town will be working directly with all individuals affected to minimize disruptions. Additionally, the project will progress in accordance with all applicable laws and regulations, including the Uniform Act of 1970, which affords many rights and protections to property owners and leaseholders.  This may include assistance with finding replacement housing and financial assistance for relocation.  (Return to Top)

What will happen to the current Cary Depot?

The role of the existing Cary Depot will be considered during the design phase of this project, which is anticipated to begin in late 2021.  Once the design phase begins, there will be additional opportunities for the public to provide feedback on the project.  (Return to Top)

It seems like bus traffic at the Depot has increased significantly.  When was this change approved and how is it being paid for?  Do you have a financial document that you can share with the public?